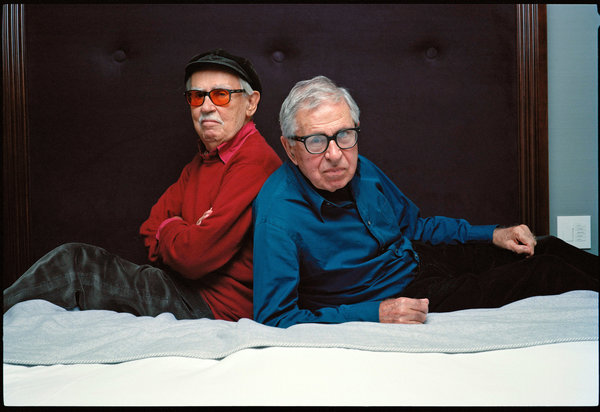 The brothers Vittorio, right, and Paolo Taviani have been making films together for nearly 60 years. They set their latest, “Caesar Must Die” in a maximum-security prison in Rome.

Nearly 40 years ago the brothers Paolo and Vittorio Taviani wrote and directed “Allonsanfan,” starring Marcello Mastroianni as a revolutionary in the Napoleonic era. After its premiere at the Cannes Film Festival Mr. Mastroianni met with reporters, and when they asked him about the unusual experience of working with two directors on the same film, he feigned surprise. “Were they two?” he asked.

“Caesar Must Die” takes place in a maximum-security prison in Rome.

The Taviani brothers drew from Pirandello for their 1984 film, “Kaos” (with Margarita Lozano), and they tapped Shakespeare for “Caesar Must Die.”

Vittorio, left, and Paolo Taviani on the set of their 1977 film, “Padre Padrone.”

The Tavianis are now in their 80s, but at an age when most of their contemporaries have retired they continue making films, and in seamless unity. Their latest effort,“Caesar Must Die,” which opens on Wednesday, is one of their most artistically ambitious productions: a fictional feature with elements of a documentary and the theater, about the staging of Shakespeare’s “Julius Caesar” in a maximum-security prison in Rome.

“What kind of film is this?” Vittorio Taviani, 83, asked rhetorically during an interview last fall, when “Caesar Must Die” was shown at the New York Film Festival. “It’s a true film, a fiction film in which the reality of the prison is physically palpable.” Paolo Taviani, 81, completed the thought: “The energy of this film is born of pain, you see the walls and the bars before you, the authentic pain of the people living inside the prison.”

The Tavianis, who have written or directed 22 films together, are not the only pair of siblings making films together of course. In Europe there are also the Dardenne brothers of Belgium, while the United States has the Coens, the Wachowskis, the Farrellys and the Hugheses. But the Tavianis have been doing it longer than anyone else — since 1954 — and have developed a working method that minimizes friction by alternating the direction of individual scenes.

“The crew that knows us asks, ‘Who’s the first today?’ ” Paolo explained. “And while that person is at the helm the crew has to answer only to the director in charge at that moment. They can’t go ask Paolo something they want to do. When it’s finished, I come and look at the video.”

Vittorio continued: “The other is at the monitor, watching the video. We have a very acute nonverbal, telepathic communication. If the one at the monitor starts to scratch his head, the other understands. So we have a silent meeting, we correct it, and then we go off again.”

Writing scripts works in much the same fashion. They live within walking distance of each other in Rome, so they will often meet at a park and discuss whatever their current project happens to be while walking their dogs together and then go to one or the other’s house and get down to work, seated across from each other at a table.

For “Caesar Must Die” the brothers brought in a collaborator, Fabio Cavalli, to help distill and shape the Shakespearean text into a screenplay. In a bit of meta playfulness Mr. Cavalli, who directs a theater troupe at Rebibbia prison in Rome, was cast as the director of the play within the movie.

“The themes of guilt and friendship, betrayal and conspiracy are at the center of Shakespeare’s play, and also at the center of the life experience of the actors,” many of whom are serving terms for Mafia- or Camorra-related crimes, Mr. Cavalli said. “So many actors and directors had come to Rebibbia,” he continued, but until the Tavianis came along, “nobody understood that here was an opportunity to make a movie about this extraordinary environment so full of art, the hope of freedom, and consciousness.”

“Caesar Must Die” was born when a journalist friend of the Tavianis urged them to visit a performance by the Rebibbia troupe. They were reluctant at first. “We thought, oh, it’s going to be the same old thing,” Paolo said. But once they saw the prisoners performing Dante and Pirandello, they changed their minds.

“We immediately had this sense that this was a great idea come down to us from the heavens,” Vittorio said. “These compatriots of ours are tragic figures, really. They know crime and conspiracy, so let’s let them tell the tragedy of Julius Caesar and Mark Antony, which is an Italian story, a Roman story that’s part of the collective imagination of the Italian people.”

The Tavianis have a long history of adapting works from the Western literary canon. Since releasing the semi-autobiographical “The Night of the Shooting Stars,” an international hit 30 years ago, they have twice made films drawing from Pirandello (“Kaos” and “You Laugh”) and Tolstoy (“Night Sun” and “Resurrection”) and also adapted Goethe’s“Elective Affinities” for the screen. In addition they made a mini-series for Italian television, “Luisa Sanfelice,” based on a novel by Alexandre Dumas.

“They are very literary sort of intellectuals, but not university-type intellectuals,” said Peter Bondanella, an emeritus professor at Indiana University and author of “Italian Cinema: From Neorealism to the Present.” “They have this background that was typical of their time, but isn’t so common these days. They come not from film school but from a more intellectual direction, and I think that is because of their politics, that they saw film as a way of changing people’s minds.”

In several other respects, though, “Caesar Must Die” represents a conscious circling back by the Tavianis to their origins. “At a certain moment we said to ourselves, ‘Wouldn’t it make more sense to shoot with the same daring with which we shot our very first films?’ ” Paolo recalled. “This is also because we shot the film in 21 days, with very little money, just like when we were very young. So from the economic point of view we were returning to our earliest state.”

“It was exciting,” he continued. “There was no time or need to reflect on anything, this or that, to the producer. We were free. This really helped the film. No stars, and we shot digitally. It’s the first time we shot in digital, so that was a novelty for us.”

Early in “Caesar Must Die” there is a scene in which prisoners are auditioning for the play, and as they perform the camera moves in tight on their faces, which are full of expression and character. That fondness for magnifying the features of ordinary faces has long been a trademark of the Tavianis, who were inspired by Italian Neo-Realist films like Roberto Rossellini’s “Paisan.”

Carmelo Cantone, Rebibbia’s warden, said he had favored allowing the Tavianis to shoot there because he hoped their film would show how “living in this kind of space affects the prisoners.” Mr. Cantone, who is a bit of a cinephile, watched some of the scenes being filmed but said he was nevertheless startled when he saw the images on a screen.

“When Wim Wenders made his film about the last days of Nicholas Ray, he said that ‘through the camera lens I see things I could never see with my naked eye,’ ” Mr. Cantone recalled during a telephone interview from Italy. “Well, it was through the lens of the Tavianis that I came to understand the prisoners and what is going on around me. This is cinema of great pictorial value, a cinema of portraiture done in painterly style.”

Of the many Taviani films the one that shares the closest kinship to “Caesar Must Die,” they said, is “Padre Padrone,” a compelling tale of an illiterate Sardinian shepherd boy who transforms himself into a professor of linguistics, which won the Palme d’Or at Cannes in 1977. Both films mix professional and nonprofessional actors, use documentary techniques and share a similar sensibility, the brothers explained.

Encouraged by the critical and commercial success of “Caesar Must Die,” which won the top prize at the Berlin Film Festival last year, the Tavianis plan to begin work on another film as soon as possible. “When our sense of amazement is exhausted, when we don’t feel those strong emotions anymore, then and only then will we stop,” Paolo said.

His brother concurred, adding: “We’re sure that another one will come along, just as we’re sure about death. I’m saying that in a beautiful realistic sense, considering our age.”

A version of this article appeared in print on February 3, 2013, on page AR14 of the New York edition with the headline: Brothers, Romans, Filmmakers.